The Parallel Worlds Of Gondolas And iPads

When we arrived in Venice last week, I could not locate a single car. Only gondolas and transport boats peppered the waterfront. The gondolas earn top billing and represent an ancient, longstanding form of innovation and transportation. Will today’s innovations, such as the iPad, endure over 500 years of popularity?

When we arrived in Venice last week, I could not locate a single car. Only gondolas and transport boats peppered the waterfront. After hundreds of years, the transportation system has barely changed. The gondola, a marvelous, ancient rowing craft, is part of a complex web of commercial and passenger interdependence and has withstood the test of time. Will today’s game-changing mobile innovations be able to boast the same infamy?

While we revel in the impact of mobile technology on our daily lives, think about how the gondola–one of the first mobile innovations to navigate the ancient Venetian canals–has endured centuries of social, economic, and political changes. In many ways, the gondola’s rich history and stability remind me of how mobile technology has gained market dominance. I’m also intrigued by the parallels between the gondola and Apple’s winning product streak: 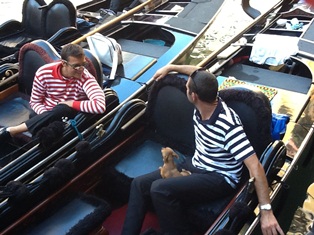 The The ferro, a sturdy iron symbol placed at the stem, is festooned with six “teeth” which represent the six districts of Venice. The top of the ferro represents the Doge of Venice’s hat. The Doges ruled the Venetian republic for centuries, and cited gondolas as early as the 11th century in their letters. You can spot Apple’s distinctive devices from any distance because they have maintained a common “ferro” of their own for the past decade. Apple products don’t just represent sleek design and intuitive user interfaces. They have also spawned an accessory cottage industry.

While Venice’s economic and architectural infrastructure continues to crumble, their timeless designs and traditions stay strong. How will our own mobile innovations be remembered in 500 years?