As a senior marketer, do you express an adventurous appetite for your brand and your customers?

I’m a voracious traveler and love the science of food. For the past thirty-two years, I’ve traversed nearly every state, trekked through Central American rainforests, swam rough Pacific seas, and sampled Europe’s refined cuisine. Nothing, however, compares to Anthony Bourdain’s travel log and gastronomic adventures.

I first started following his series on The Travel Channel, No Reservations. Later, when he was wooed by CNN, he created a hybrid food and social documentary series entitled Parts Unknown.

Now celebrating its tenth season, Parts Unknown’s mission is a much needed tonic in today’s fragile socio-political climate. The show’s mantra is “to eat and drink with people without fear and prejudice.” Each episode serves up Bourdain’s endless curiosity for his local hosts with a soupçon of humor. His brand is clear and undeniably edgy.

As a senior marketer, do you express the same adventurous appetite for your brand and your customers?

Bourdain’s approach to delivering insights to expand our world view may not be your cup of tea. But it definitely offers a barometer on how gutsy you are when it comes to expressing your personal and organizational brand. Here are three lessons I learned from Bourdain’s robust culinary and media career:

Photo courtesy of The Travel Channel

(1) Tell the truth, no matter what. During Bourdain’s lecture in Washington, DC in 2013, I heard some pretty scathing remarks regarding Paula Deen’s culinary empire. How could a white Jewish male lambast a sweet grandmother from Savannah? I do declare: he did it easily.According to Bourdain, Deen waited at least three years before telling her community about her diabetes. Reports indicate she was diagnosed in 2008. He also believes that she waited for the ink to dry on her sponsorship deal with drugmaker Novo Nordisk. In early 2012, she teamed with them to promote a Novo diabetes drug. In a 2012 interview with Eater, Bourdain challenged her decision: “When your signature dish is hamburger in between a doughnut, and you’ve been cheerfully selling this stuff knowing all along that you’ve got Type 2 Diabetes… It’s in bad taste if nothing else. How long has she known? I suspect a very long time.” Delay and deception are the ingredients to launching a tasteless brand. 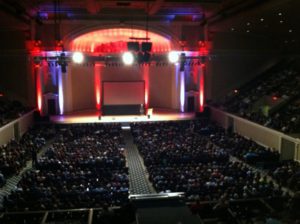 (2) Make it personal. Bourdain dedicated the last portion of his lecture to a topic that hits closer to home: teaching our children to eat healthy. For him, it’s personal. Bourdain quit smoking when his daughter, Adriane, was born in 2007. That’s when his commitment to teaching her healthy eating habits emerged. He told Grub Street New York that “I’ve gone with the black propaganda method. I’ve told my child that McDonald’s is bad and causes horrifying health effects that are likely to make her unhealthy, physically unattractive, and marginalized at school. Scaring the hell out of a kid isn’t so hard. Ronald McDonald is a bad guy in our house. He’s not a friendly clown.” (One of my favorite Bourdain rants is called “The King, The Clown, and The Colonel.” You can guess the usual suspects.)

(3) Choose acceptance over austerity. Bourdain’s enfant terrible persona, at times, makes me uncomfortable. He is very vocal about vegans and vegetarians who thrust special dietary demands on their hosts. Admittedly, I’ve done the same while visiting other countries, and I’m sure that I have insulted more than one country host.

During his numerous Vietnam treks, Bourdain has always been cognizant that some hosts serve dog. One host—an amputee who lost both legs to the stray landmines American troops had dropped during the Vietnam war—served Bourdain an unidentified meat with great kindness and hospitality. That’s when Bourdain honored his “Grandma rule.” “When I was a boy, we always ate Thanksgiving dinner at Grandma’s. She served the same dry turkey every year. And even though I hated it, I smiled and said ‘thank you.’”

Choosing acceptance over austerity, sharing your personal story, and responding rapidly takes guts. You need to tap into your “inner marketing guru” to find what’s true. Bourdain’s approach may not appeal to your tastes, but it deserves a place on the marketing menu. Bon appetit.

6 Questions All CMOs Need To Ask Themselves

What’s the deal with 2023 scenario planning?

Collaborative, cross-functional planning requires us to explore new growth strategies. Those strategies should fulfill three guiding principles: they must boost the bottom line, align with our core values, and drive predictable 2023 results.